Global icon Priyanka Chopra keeps treating fans with photos of her and husband Nick Jonas‘ family. The diva on Tuesday shared a photo of brother-in-law Joe Jonas and his wife Sophie Turner as she wished them on their first wedding anniversary. Joe and Sophie got hitched twice- once in a surprise wedding in May 2019, then they had a France wedding on June 29 in the presence of their friends and family. Wishing them on the big day, PeeCee shared a photo of the lovestruck couple on Instagram and wrote, “Happy 1 year anniversary. Love you both.”

Priyanka Chopra shares a very warm bond with Joe and Sophie. They have been frequently seen hanging out together for double dates, and watching plays or games. 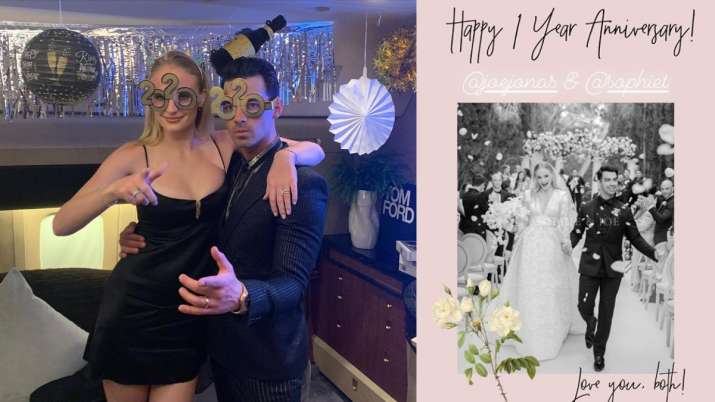 While Joe and Sophie were supposed to get married in France on June 29, 2019, they left their friends as well as their parents shocked when they got married in Vegas after the Billboard Music Awards. It was a secret ceremony with just a few friends and their band members in attendance. Even Joe’ parents got to know about his wedding through the internet.

Talking about the same, Joe had said, “My parents called me the next morning and they were like ‘Did you just get married?’ And I realised that I told everybody, but forgot to tell my parents. So, kids, make sure you tell your parents when you’re getting legally married!”

He added, “we thought it would be really fun to get all of our friends, invite them out (to Vegas), and do an impromptu wedding. And we actually had some people that I didn’t even know that well there. Some people (in attendance) I am now closer with! Khalid was there! That was cool. And Diplo decided to livestream the whole thing.”

Currently, Joe and Sophie are expecting their first baby together.

On the other hand, Priyanka Chopra has always been very fond of Sophie Turner and sang praise of her as an actress as well as a sister-in-law. She told Indulge Express earlier about her boond with Sophie: “My jethani-devrani? (Laughs out loud.) Sophie calls herself ‘jethani’ (elder sister-in-law). She’s like, you have to listen to me, I’m the jethani. She loves being jethani”

Priyanka and Nick had a big fat wedding in Jodhpur’s Umaid Bhawan Palace in December last year and the celebrations continued for three days. The Jonas Brothers and their better halves Sophie and Danielle were also present at the ceremony.

For all latest news and updates, stay tuned to our Facebook page

Back in action, Rahul asks Bihar Congress workers to reach out to people virtually

Image Source : FILE Back in action, Rahul asks Bihar Congress workers to reach out to people virtually  It was

Government hints at incentives for resumption of film, TV production